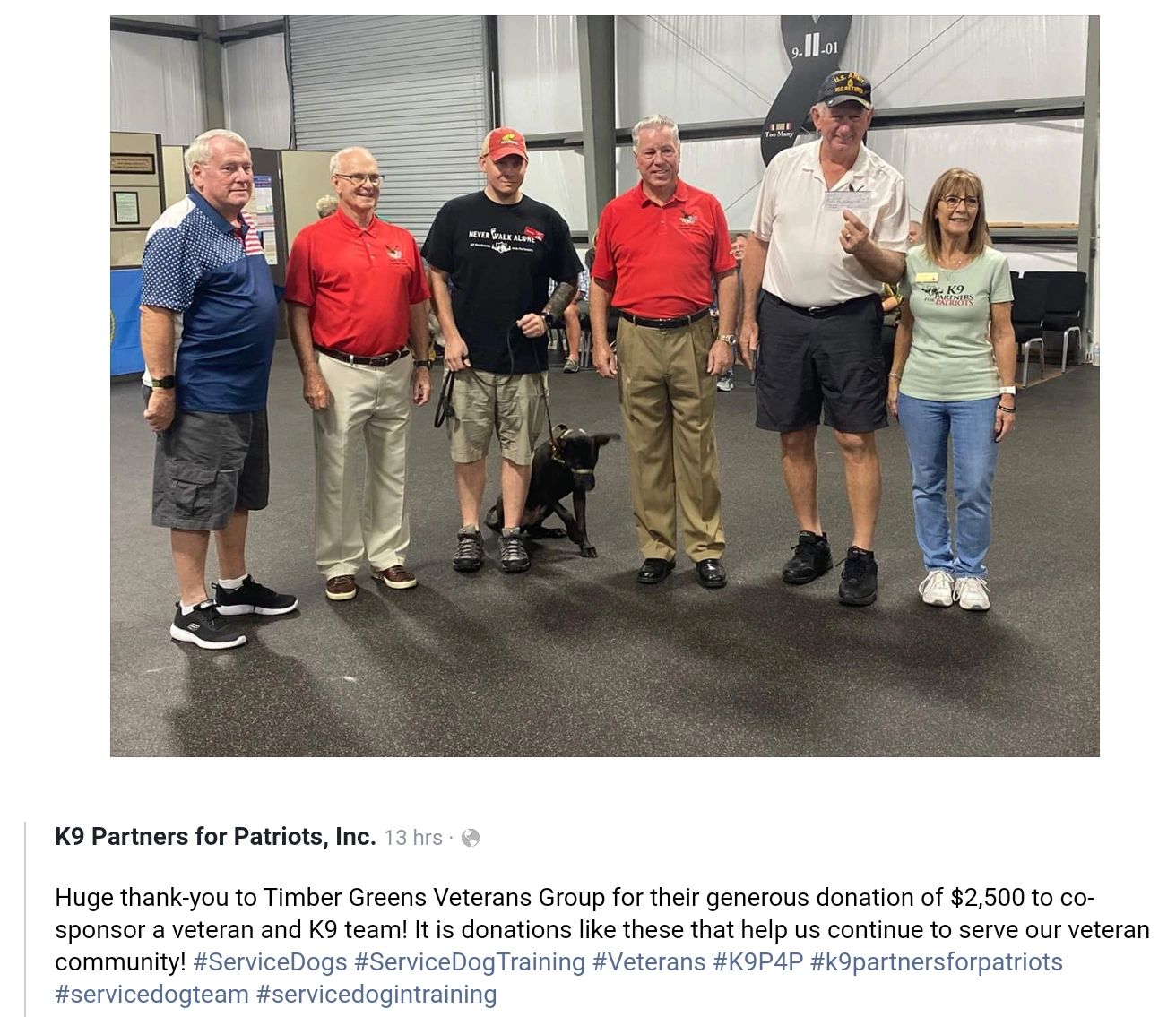 On Tuesday, March 10, TGVG presented a check for $2500 to Mary Peters, CEO of K9 for Partners, to co-sponsor another veteran and K9 team. Jeremy and his K9, Donnie, will start their 3 month graduate training on the March 24th.

Since 2017 Timber Greens Veterans Group has donated over $9000 to K9 Partners for Patriots.

Graduation of our Sponsored Vets

This web site lists all MIA/POW that have been accounted for. It is divided by year. You can search by all column titles. Go here to visit this site.

If you know a World War II, Korean, or Vietnam Veteran that would like to visit the memorials in Washington, DC. please contact Honor Flight and let them know.

Take a little trip to Valley Forge in January. Hold a musket ball in your fingers and imagine it piercing your flesh and breaking a bone or two. There won’t be a doctor or trainer to assist you until after the battle, so just wait your turn. Take your cleats and socks off to get the real experience.

Then, take a knee at the beach in Normandy where man after American man stormed the beach, even as the one in front of him was shot to pieces, the very sea stained with American blood. The only blockers most had were the dead bodies in front of them, riddled with bullets from enemy fire.

Take a knee in the sweat soaked jungles of Vietnam. From the Khe Sanh to Saigon, anywhere will do. Americans died in all those jungles. There was no play book that told them what was next, but they knew what flag they represented. When we came home, we were protested as well, and spit on for reasons only cowards know.

Take another knee in the blood drenched sands of Fallujah in 110-degree heat. Wear your Kevlar helmet and battle dress. Your number won’t be printed on it unless your number is up! You’ll need to stay hydrated but there won’t be anyone to squirt Gatorade into your mouth. You’re on your own.

There are a lot of places to take a knee where Americans have given their lives all over the world. When you use the banner under which they fought as a source for your displeasure, you dishonor the memories of those who bled for the very freedoms you have. That’s what the red stripes mean. It represents the blood of those who spilled a sea of it defending your liberty.

While you’re on your knee, pray for those that came before you, not on a manicured lawn striped and printed with numbers to announce every inch of ground taken, but on nameless hills and bloodied beaches and sweltering forests and bitter cold mountains, every inch marked by an American life lost serving that flag you protest.

No cheerleaders, no announcers, no coaches, no fans, just American men and women, delivering the real fight against those who chose to harm us, blazing a path so you would have the right to “take a knee.” You haven’t any inkling of what it took to get you where you are, but your “protest” is duly noted. Not only is it disgraceful to a nation of real heroes, it serves the purpose of pointing to your ingratitude for those who chose to defend you under that banner that will still wave long after your jersey is retired.

If you really feel the need to take a knee, come with me to church on Sunday and we’ll both knell before Almighty God. We’ll thank Him for preserving this country for as long as He has. We’ll beg forgiveness for our ingratitude for all He has provided us. We’ll appeal to Him for understanding and wisdom. We’ll pray for liberty and justice for all, because He is the one who provides those things. But there will be no protest. There will only be gratitude for His provision and a plea for His continued grace and mercy on the lad of the free and the home of the brave.

Your contribution will enable us to support our employees and continue operations. We are very grateful for your generosity.